Our journey begins with a love story that takes us from the UK and the United States and ends with one of New Zealand’s most creative and established distilleries – Dancing Sands. Our founders Sarah and Ben first hit it off when they met through their corporate jobs. After managing a long distance relationship between New York and London they decided to start a new chapter together in New Zealand.  Eventually, Sarah and Ben Bonoma both left their corporate careers and took a leap into the unknown to establish Dancing Sands Distillery in 2016.  Trading the corporate for the creative, and spreadsheets for stills, the Bonomas risked it all to follow their dream: producing world-class spirits in what is the most beautiful place on the planet.

Like all great partnerships, Sarah and Ben are more than the sum of their parts. Sarah’s cutting scientific mind (she has a MSc in Genetics) is matched by Ben’s flavour-driven creativity. The result? A dynamic distilling duo on a mission to bring a part of Golden Bay to the rest of New Zealand, and the world.

It’s one of the most remote places in New Zealand, and as such, still enjoys a largely untouched environment.

The nearby mountains are filled with rich minerals – including gold, which gave the bay its name, and brought people from far and wide to this corner of the South Island. Marble and limestone mountains surround the region and make up the bedrock of its aquifers delivering the water in the region as some of the purest on the planet – perfect for making gin.

These days, the bay is home to a small, welcoming and close-knit community. Together we’ve survived fires, floods and landslides, maintaining this special part of the world as one. Artists and artisans rub shoulders with farmers and fishermen, and the abundant natural resources have made the region a hotspot for high quality cuisine and drink.

At Dancing Sands, the emphasis is on working together. We have moved away from the customary hierarchy distillery structure of head distillers, instead taking a holistic approach to producing New Zealand’s best spirits. We consider all the perspectives and taste buds we’re lucky to have on-hand at Dancing Sands.

Our team has been brought together from industries as diverse as baking, marketing, and bartending. We hire for attitude and train our team on the job. Another member of the team who has come from beyond the shores to make New Zealand her home. Erin is our marketing maestro who has led marketing in the beauty, food and beverage industries, both here in NZ, and back in her home country of Canada.  Besides a keen interest in drinks, Erin has never met a cat she didn’t like.

Niki has a love of top quality spirits forged in famous cocktails bars from Australia to Scotland. A move into distilling was a natural fit, Niki joined our team in 2020. Since then, she’s used her keen sense of flavour to push the envelope on our signature cocktails. Niki has taken to life in Golden Bay like gin takes to tonic – with two young children, horses and a thriving garden keeping her hands full. A member of our distilling team who has taken the road less travelled to live the dream. Jamie previously worked in logistics and marketing – meaning he has all the know-how to make sure our orders are filled. When he’s not distilling delicious gin, he’s making elaborate meals as an ambitious home chef. Jamie and his two dogs are a common sight on Golden Bay’s beaches.

Our star of the stills, Dave swapped jam for juniper after a previous life as a pastry chef. One of our old hands, Dave has been with the team since 2017. He’s now one of the rocks of our distillery, doing everything from planning production runs to manning the stills. Like Jamie, Dave is another dog lover who makes full use of Golden Bay’s beautiful beaches. 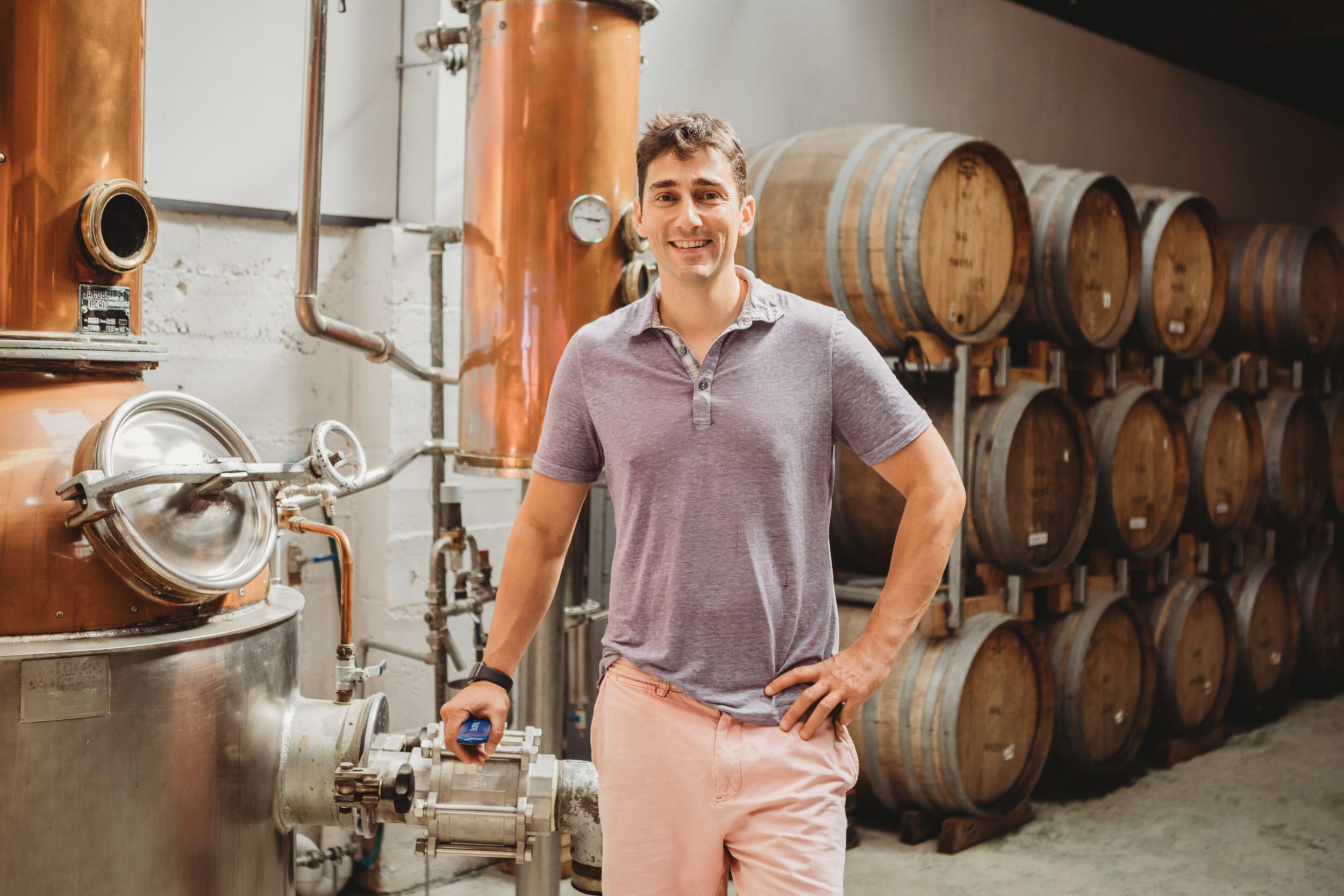 The creative driving force that gives life to Dancing Sands’ gins. Previously a tech consultant who jumped into distilling with zero experience, Ben has poured his imagination into dreaming up some of NZ’s most intriguing and delicious gins. Alongside Sarah, Ben is one half of a formidable duo that steers Dancing Sands. Sarah oversees the nuts and bolts of how the business works – leading our team and making sure the wheels of our gin machine continue to turn. While Ben provides creative spark, Sarah fans the flames, turning ideas into reality, and experiments into products drinkers can enjoy. Like Ben, Sarah left a corporate role to become a gin-maker. Sarah has innate curiosity and a strong desire to produce her best.

All spirits start their journey as a lower alcohol by volume (ABV) liquid. Ours is made by milling grain, adding yeast which consumes naturally occurring sugars that creates alcohol and CO2 as by products.

Our copper still is filled with alcohol and slowly heated. The key to distillation is that alcohol boils at 78.4oC, whereas water needs to reach 100oC. The alcohol evaporates and moves up the still separating itself from the water.

The alcohol vapour reaches the condenser and turns back into a liquid – a more concentrated alcohol with a new flavour profile imparted from the botanicals.

Post distillation, an additional infusion can be added (e.g. strawberries and rhubarb are infused to create our Sun-Kissed Gin) or the gin can be rested in wooden barrels (e.g. our Barrel Aged Gin).

Spirits are blended with water to achieve its final alcohol strength, ours range from 37.5% to 58% Alc./Vol.. It is then bottled, labelled, and sealed by hand before being shipped out of the distillery.

Cart
Back To Top